This is the second in a series of three posts that will demonstrate implementation of three common Rails design patterns: the adapter pattern; service objects; the decorator pattern

You can find the code for these posts here You can find a demo of the app, deployed to Heroku, here.

In Part I of this series, we began refactoring a simple Rails app that helps us track issues on our GitHub repositories. You can view the code, pre- and post-refactor here.

Previously, we implemented the adapter pattern, building a wrapper for our application's interactions with the GitHub and Twilio APIs. This refactor helped us begin to clean up our controllers. However, both the RepositoriesController and the WebhooksController still contain a lot of ugly logic around:

Here, we'll build a series of services to encapsulate these responsibilities.

A service is a Plain Old Ruby Object (PORO) that helps us keep our controllers clean and DRY.
Service objects encapsulate some of the user’s interactions with the application––the kind of stuff that doesn’t belong in the controller, but also doesn’t rightfully belong to the controller.
Think of them as the administrative assistant of your app.

Any of the above-mentioned jobs make great candidates for service objects.

Let's start with our RepositoriesController. 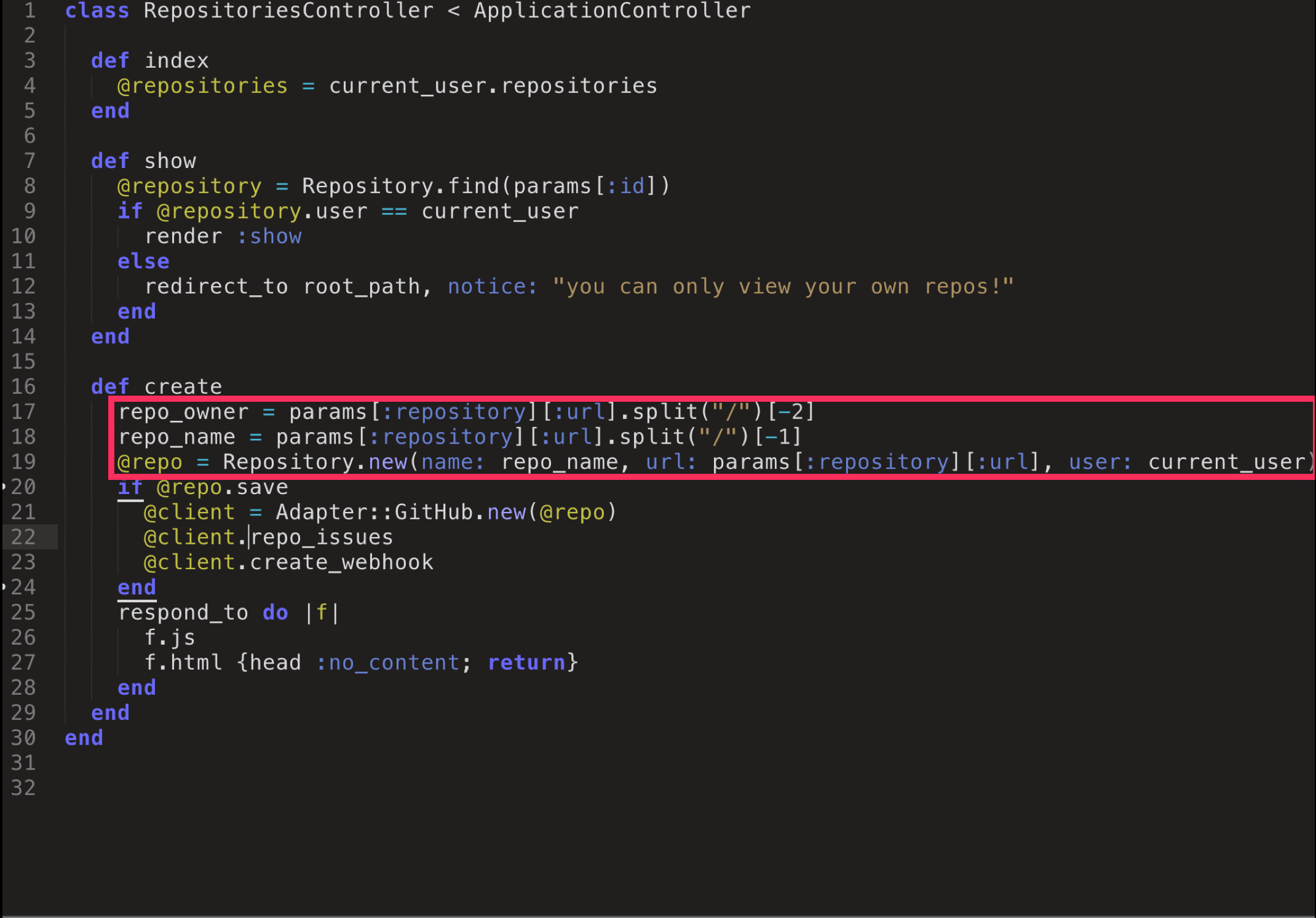 Here we can see that we have to do some string manipulation on our params in order to extract the data we need to create and save a new Repository record.

Let's abstract this out into a service object.

Here we'll define our service and define a method, #generate_repo, that will contain our extracted code:

Now, let's use our service object in our controller:

Let's do the same type of clean up on our WebhooksController. 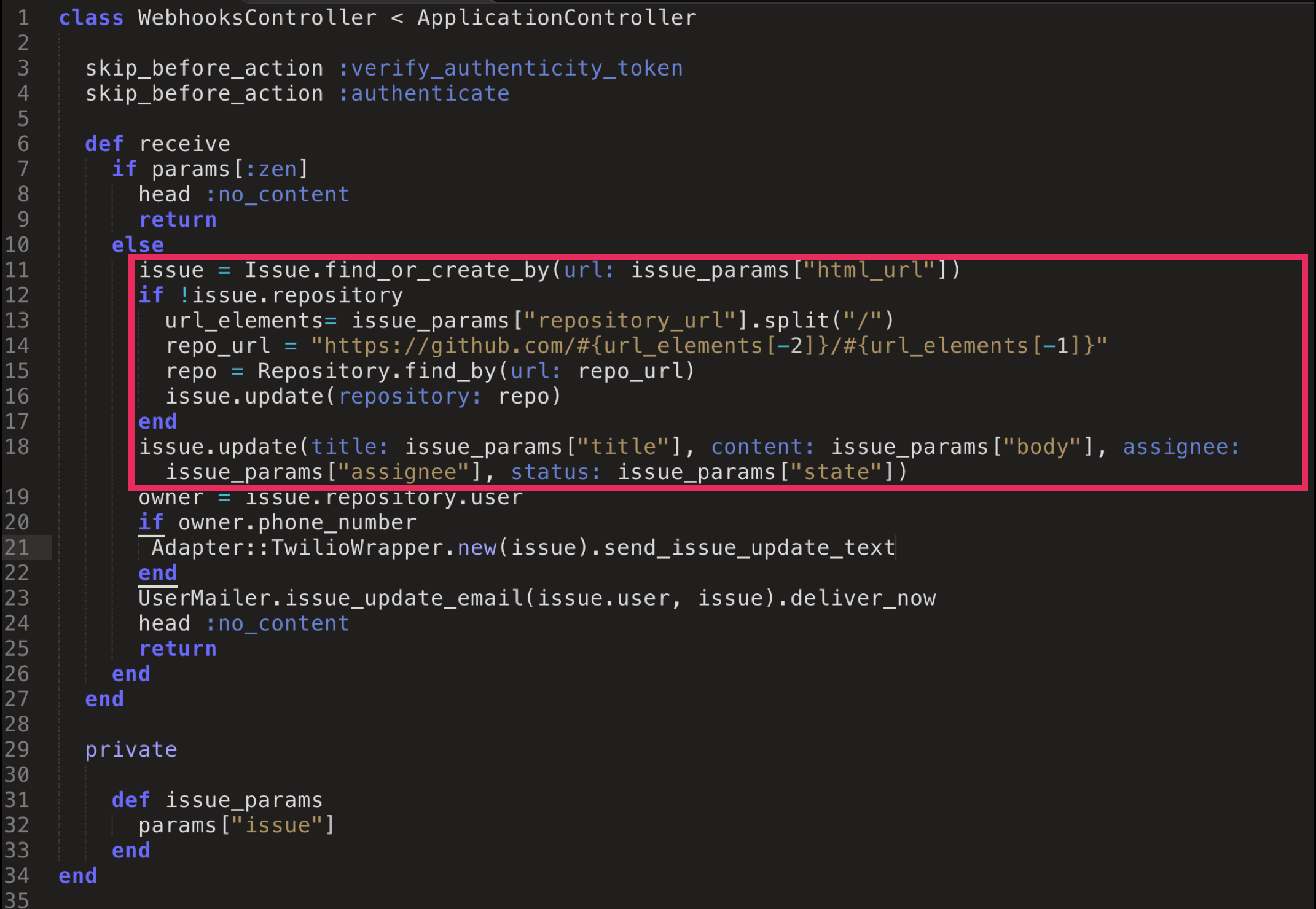 Here, we have a lot of messy logic surrounding how we update or create an issue, given the payload sent to us from GitHub (thanks to our webhook).

And, on top of all that, just like in our original Repository creation code, we're manipulating strings of data to retrieve the info we need to create new records.

Let's build a service to handle all of this for us.

We'll also define a helper method, #update_issue_repo, to handle the job of finding or updating the issue's repository (in this app, an issue belongs to a repository and a repository has many issues). That is really a separate job that needs to occur in order for an issue to be properly updated.

Now, let's use our service object in the controller:

This controller action is starting to look much more organized!

There is one other area that I'd like to address here though. 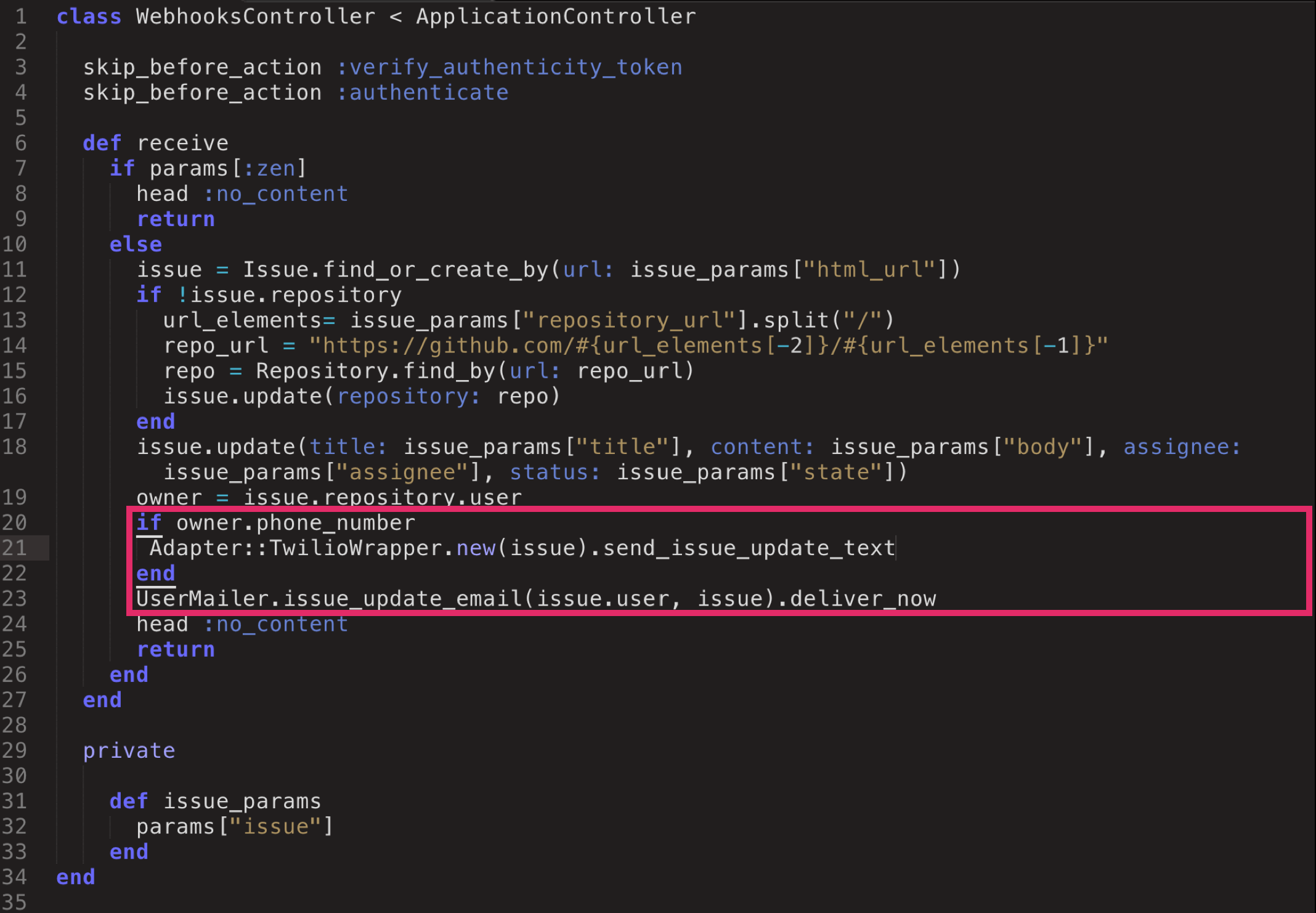 Let's build a service object to wrap up this functionality.

Here, we'll define our service object class and abstract away our code for sending emails and texts.

Let's call on our service in our controller.

That looks clean and beautiful!

Now that our controllers are clean and DRY, and we've build adapters and services to handle the appropriate logic, we'll move on to some view refactoring. In the next post, Part III of this series, we'll learn how to recognize some code smells in the views, and implement the decorator pattern to address them.